Choosing a good Bible for study is important.


Luther declared that his conscience was captive to the Word of God.


If a given Bible is to bind a Christian's conscience as God's Word, it had better be accurate.


Five editions are before you in this review.

Since our review copy was digital, we regrettably lost track of it for a time (unlike the books pending review sitting in foot-high stacks). We apologize for the delay since we received our copy in late summer 2010.

This is a massive undertaking. Even taking on editing an edition of the Greek New Testament would be a daunting task. This project includes the Greek edition of the Hebrew Scriptures, a concordance, and an index.


The primary resources we have reviewed focus on Greek and English. The main page of the website indicates a Portugese website, forecasting a 21st century true polyglot resource! 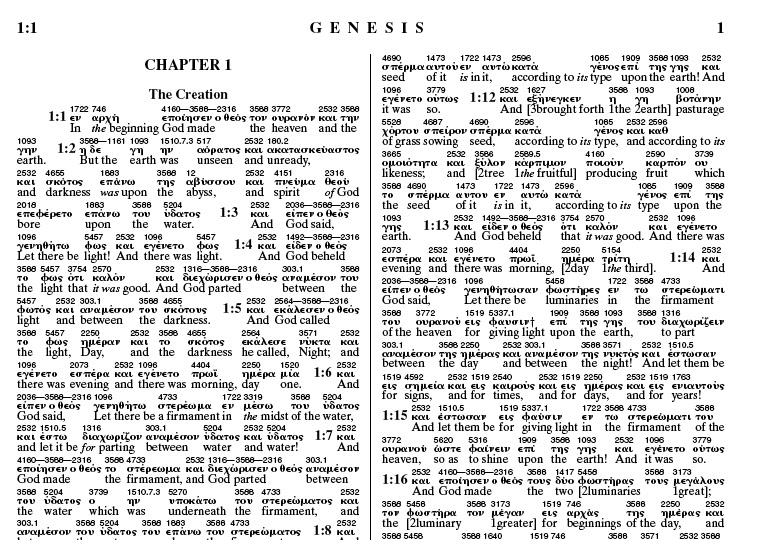 The above is a sample of a page from The Apostolic Bible Polyglot Old (LXX) Testament.

One could print off all of the resources and use up a lot of paper and ink, or you could make use of the pdf files on your laptop, Kindle, iPad, or tablet device. There is a wealth of scholarship to explore.


Personally, there is nothing like the smell of a leather-bound hardcopy printed Bible, also available in their bookstore. Multiple hardcopy editions are available. The only difference is the cover material. Watch this project for further developments! 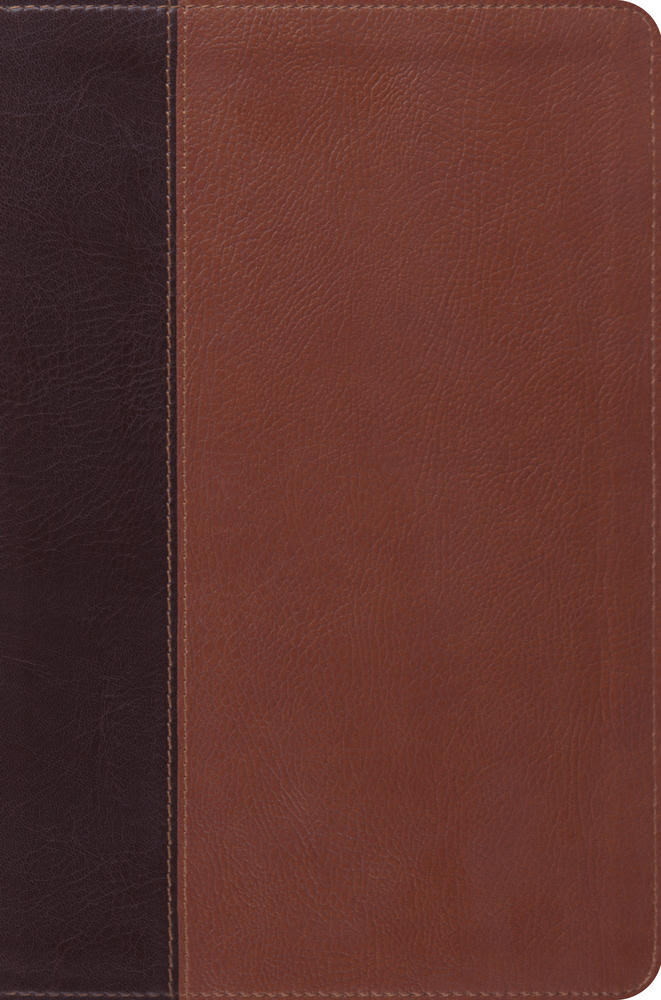 The ESV Single Column Legacy Bible is a new text-only edition with a fresh design. Based on the Renaissance ideal of a perfect page, it features a simple, clear layout that includes wide margins. With a concordance, full-color maps in the back, and the readable ESV text, this is a quality edition that can be read and enjoyed for a lifetime (Publisher's website).

I prefer text-only editions because there are far fewer human interpretations and opinions to get in the way.


Pages are crisp and clean-looking. Editor-provided headings are pushed to the outside margins. Textual notes and alternate translations appear at the inside bottom of a page. Nine point type is pleasant to read.

I can personally attest to the lifetime guarantee promised by the publisher.


When the ESV translation was new, I purchased an edition whose cover wore out in the first year. It was immediately replaced. Crossway's customer service is stellar. And I have never received better packaged books in shipment from ANYONE else.


Later, at the 2004 LCMS Convention, I purchased a pocket ESV edition with the same TruTone Smyth-sewn binding. I've carried it with me for every national and district convention since in addition to its regular duties as my Bible for shut-in and hospital visits. After eight years of use, I am pleased to share that it still looks nearly new. This edition should wear as well for you.
When the ESV Study Bible came out, we had concerns. (Since our pdf files are temporarily unavailable, we reproduce our ESV Study Bible review here from Liturgy, Hymnody, & Pulpit Quarterly Book Review Volume 3, Issue 3, Apostles’ Tide, 2009.)

Yes, when the ESV Study Bible came out, we had concerns. When Crossway edited that volume down to the ESV Student Study Bible, many of those earlier concerns fade away. 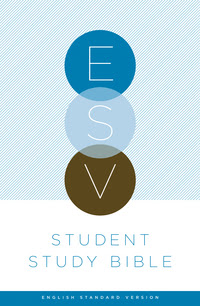 The ESV Student Study Bible is ideally suited for students who are serious about God’s Word—who want to learn more about what the Bible teaches and how the Bible applies to all of life.


With 12,000 clear, concise study notes, the ESV Student Study Bible provides numerous new features—including nearly 900 “Did You Know?” facts, 120 new Bible character profiles, and 15 new topical articles. It also features a new glossary of key terms, more than 80 full-color maps and illustrations, an extensive concordance, and 80,000 cross-references. These and many other features make it the most comprehensive, colorful, and content-rich student Bible available today. Suited to high school and college students, the ESV Student Study Bible is also a versatile resource for anyone engaged in serious study of God’s Word.


Created by an outstanding team of more than 100 evangelical Christian scholars, teachers, and pastors, the ESV Student Study Bible is adapted from the highly acclaimed and best-selling ESV Study Bible. With numerous new features, the ESV Student Study Bible is an invaluable resource.  For high school and college students, but equally for all students of the Bible—for everyone who loves to read and learn more about God’s Word.
(Publisher's website)

This is what I would consider a flagship resource for Crossway. I would rank it head and shoulders above all of the print study Bibles we reviewed last December (http://lhpqbr.blogspot.com/2011/12/pulpit-review-study-bibles.html).

How does this adapted edition fare? Let's revisit some points from before.

I like the resource overall, but cannot endorse it because of issues primarily with the teaching of the Sacraments of Christ (15:29, 1 Corinthians 11:24). A Study Bible's notes should be trustworthy and bold, teaching what the text says, rather than merely explaining what different groups think the words mean.

The ESV Student Bible is a more concise and more trustable resource for a Lutheran Christian than the ESV Study Bible, but my preference will remain The Lutheran Study Bible (ESV).

If you're looking for a new plain-text ESV Bible, go with The ESV Single Column Legacy Bible. Pair it, or The Lutheran Study Bible (CPH) with the ESV Bible Atlas (http://lhpqbr.blogspot.com/2010/08/pulpit-review-esv-bible-atlas.html).

Thomas Nelson sent us a complimentary review copy of The Expanded Bible.

Explore the Depths of the Scriptures While You Read

Expect understanding! Experience the full meaning of God’s Word. The Expanded Bible has been developed by a respected team of skilled Bible translators to make God’s Word easier to understand—and more relevant and real for today’s Christian—with innovative expansions in the text itself that exhibit the complete meaning of each passage in its context—while you read.

I expected an updated version of The Amplified Bible, where the base text was the KJV descendant American Standard Version, the base text here is the New Century Version. The differences already can be predicted.

The KJV, ASV, RSV, and ESV are essentially literal word-for-word translations. Since the NCV is "meaning-based," or functional-equivalent, similar to the NIV, I am already discouraged. This, I believe, is the primary weakness of The Expanded Bible. It would be a much stronger resource with a literal Bible translation as a base text.


Genesis 1:1 sounds predictably like we would expect it to. The note on "created" is helpful. Some might question how helpful "sky" is as a translation over the traditional "heavens."

Reading Joshua 24:15 makes it clear that the "choice" is between to sets of pagan gods. Reading 1 Corinthians 11 on the Lord's Supper does little to clarify the Greek of the text in controverted places (diatheke, "body," et al).

Understand what kind of tool this Bible is. It is not designed to be read aloud, necessarily. Unless one is skilled with leaving out all of the bracketed notes, it would sound choppy. This is a help for a Christian or pastor who doesn't know the Biblical languages and yet wishes to know the fuller range of meaning that the Hebrew, Aramaic, and Greek provide.  It would serve as a reference Bible alongside another version. Instead of purchasing The Expanded Bible, I would urge a student wanting a similar tool to purchase instead a parallel column Bible with the KJV, ESV, and other translations as desired.

There is really no substitute for The Saint John's Bible. For the ESV translation, The Four Holy Gospels gives a reader a sample of what is possible in Biblical art (http://www.crossway.org/bibles/the-four-holy-gospels-1352-gltr/),  but there is no calligraphy and it only covers the four Gospel accounts.

With this volume, The Saint John's Bible is now complete.

After more than twelve years, the creation of The Saint John’s Bible has reached its remarkable conclusion. Renowned calligrapher and illuminator Donald Jackson has collaborated with scribes, artists, and theologians to hand-create, with stunning lettering and exquisite illustrations, the entire Bible. The complete project spans seven volumes in published form.

Letters and Revelation is the final volume of the entire monumental project. It includes some of the most crucial works of all the Christian Scriptures: epistles traditionally attributed to Paul, John, Peter, James, and Jude, and the fascinating book of Revelation. Donald Jackson’s artistic vision lends them a new life and vibrancy for modern readers.

Letters and Revelation contains more than thirty illuminations and special text treatments. Among the stunning illuminations:

Written and drawn entirely by hand using quills and paints hand-ground from precious minerals and stones—such as lapis lazuli, malachite, silver, and 24-karat gold— The Saint John’s Bible celebrates the tradition of medieval manuscripts while embracing twenty-first-century technology to facilitate the design process and collaboration between Saint John’s Abbey in Collegeville, Minnesota, and Donald Jackson’s scriptorium in Wales.

Donald Jackson is one of the world’s leading calligraphers and the artistic director and illuminator of The Saint John’s Bible. He is a Senior Illuminator to the Queen of England’s Crown Office. He is an elected Fellow and past Chairman of the prestigious Society of Scribes and Illuminators. His 30-year retrospective exhibition, Painting with Words, premiered at The Minneapolis Institute of Arts in Minneapolis, Minnesota, in August 1988 and traveled to thirteen museums and galleries. A new exhibition, Illuminating the Word: The Saint John’s Bible, premiered a national museum tour at The Minneapolis Institute of Arts in April 2005. Exhibitions of The Saint John’s Bible continue in museums around the United States and at Saint John’s Abbey and University.


I have loved the gold illumination throughout the seven volume set. Initial Capitals and Chapter Titles are stunningly beautiful in their complex simplicity.

As a Lutheran Christian, I rejoiced in the Romans 5 art treatment of "since we are justified by faith..." And I was a little surprised at what line needed to be creatively inserted from the bottom of the page, 1 Corinthians 11:25-26, "it, in remembrance of me." For as often as you eat..."

Readers will observe 2 John, 3 John, and Jude viewable on a single two-page spread.

The Revelation to John is where the artists pull out all the stops. As Scripture's bookend to Genesis and the consummation and fulfillment of all things, artistic motifs first seen in the other six volumes return as parts of a greater whole. It was of great encouragement to see various crosses and tongues come together as the multitude sings "holy" (pages with Revelation 3-5).

I would love to see The Saint John's Bible in person, particularly to view the reflected gold of the Revelation 21 Throne and Lamb scene. Save up if you must, but invest in the whole SJB set.


God's Word is our great heritage as Christians. I take its meaning and consequences seriously, and try not to take myself too seriously. Consider the resources reviewed here as you dig deeper into the riches of Holy Scripture.

The Rev. Paul J Cain is Pastor of Immanuel Lutheran Church, Sheridan, Wyoming, Headmaster of Martin Luther Grammar School, Yellowstone Circuit Visitor (LCMS Wyoming District), a member of the Board of Directors of The Consortium for Classical and Lutheran Education, Wyoming District Worship Chairman, and Editor of QBR.