I spent February 2012 curled up with books by Wyoming authors.

One series followed the exploits of a fictional Wyoming county Sheriff now featured in his own murder mystery series on A&E.

The other series chronicles the adventures of a Wyoming Game & Fish Warden. I very much enjoyed the adventure. The salty language--not so much.

I kept wondering, "When will I hear about the adventures and exploits of a Wyoming LCMS pastor in good fiction?"


Allow me to introduce you to New York LCMS pastors Justin Corwin and Stephen Grant.

No, they're not Wyoming LCMS pastors, (and readers of QBR have already met Pastor Grant,) but either or both would be welcome to visit Wyoming anytime. 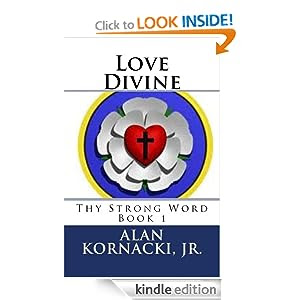 Romance and Lutheran apologetics come together as Justin Corwin, the pastor of St. Michael Lutheran Church in Carousel, New York, and Chaplain of the Carousel Fire Department, runs into Bethanne McCarthy, a detective in the Carousel Police Department--or rather, she runs into him. Justin is single and content with his life the way it is; Beth was widowed over two years ago, and she has finally found joy in life again. Neither has any intention of falling in love. As they get to know each other better, however, they begin to realize that the plans of men are nothing next to what God has set apart for them. How will their relationship affect their various vocations? How will he handle the danger of her profession? How will she overcome the guilt she feels for moving on with her life after the death of her husband? (Amazon)

Love Divine gets readers started in the daily life and adventures of of a typical LCMS pastor doing Word and Sacrament ministry in a typical congregation of our church body.

Names and situations have been changed to protect the innocent (and/or guilty). Situations are all too real. Life in a parsonage is rarely boring.

Pastor Corwin has been a single pastor.

He won't be for long, especially if you read the blurb for A Great and Mighty Wonder...

Romance and Lutheran apologetics come together as Pastor Justin Corwin and his wife, Detective Bethanne Harrigan McCarthy Corwin of the Carousel Police Department, return from their honeymoon to a hefty dose of reality. Justin's predecessor at St. Michael Lutheran Church is stirring up trouble, while the teen who stabbed Beth is on trial for his crime. A tragedy in the St. Michael congregation raises a ghost from Beth's past, one which will change their family forever. (Amazon)

I recommend this series for adults and mature high school students, especially those that are well-catechized and considering a future in church work.

LCMS pastors will appreciate fiction that honors what they do day in and day out. Perhaps some will see themselves and their practices in the other characters in the book and may learn how their actions and inactions impact sister congregations and brother pastors.

Laity will get a peek inside the so-called glass house of a parsonage. I pray this trilogy will help congregation members appreciate and pray for their pastors. 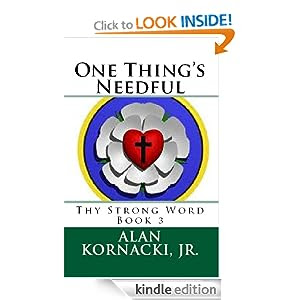 Justin Corwin, Pastor of St. Michael Lutheran Church, and his wife, Detective Beth Corwin of the Carousel Police Department, are in the midst of tribulation. Beth's body has betrayed her, making an unwanted surgery a necessity. Justin is dealing with uncertainty at St. Michael and in his work as Chaplain of the Carousel Fire Department. Living their God-given vocations is proving to be more difficult than they had hoped. Will it take a change of scenery to once again find the joy in the Lord which seems so hard to obtain? (Amazon)

I could personally identify with Pr. Corwin and St. Michael as our congregation is in need of additional pastoral care for the sake of the Gospel as well as the financial support to care for an additional servant of the Word.

I rejoiced to read a series by a pastor who understood his vocations in Christ and could show real Lutheran pastoral care in fiction. Readers will see theology in practice: Scripture, Catechism and hymnal; Baptism, Confirmation, Wedding, and Funeral; the Call Process, District "politics," a predecessor in office, controversy at a Voters' Meeting, and an Installation.

If you are looking for a quick and encouraging read, consider Alan Kornacki's Thy Strong Word trilogy.


Let me (re)introduce you to the Rev. Stephen Grant:

Stephen Grant is the pastor at St. Mary’s Lutheran Church on eastern Long Island. Grant is one of the more unique second-career clergy around, as he once worked for the CIA. Besides theology, his interests include archery, golf, writing, classic films, the beach, poker, baseball, and history. Grant also knows his wines, champagnes and brews. Oh yes, he generally dislikes politicians, and happens to be an expert marksman with a handgun and a rifle, while being pretty handy with a combat knife as well. (author's website) 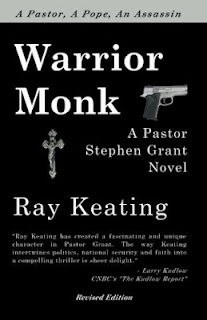 WARRIOR MONK revolves around a former CIA assassin, Stephen Grant, who has lived a far different, relatively quiet life as a parish pastor in recent years. However, a shooting at his church, an historic papal proposal, and threats to the Pope's life mean that Grant's former and current lives collide. Grant must tap the varied skills learned as a government agent, a theologian and a pastor not only to protect the Pope, but also to feel his way through a minefield of personal challenges. (Amazon)

Our 2010 review of this first Grant novel is found at: http://lhpqbr.blogspot.com/2010/11/noted-review-guns-spiesand-church.html.

This series is action-oriented, which is not intended to be a critique of the Pastor Corwin trilogy. This series is a more edifying and Christian-oriented spy/adventure series with a similar pace (and sometimes the vocabulary of the bad guys) as books by C. J. Box, Craig Johnson, as well as fans of Jason Bourne, James Bond, and the work of Tom Clancy.

Pastor Grant is back in two new novels.

Do God, politics and money mix? In ROOT OF ALL EVIL? A PASTOR STEPHEN GRANT NOVEL by Ray Keating, the combination can turn out quite deadly. Keating introduced readers to Stephen Grant, a former CIA operative and current parish pastor, in the fun and highly praised WARRIOR MONK: A PASTOR STEPHEN GRANT NOVEL. Now, Grant is back in ROOT OF ALL EVIL? It’s a breathtaking thriller involving drug traffickers, politicians, the CIA and FBI, a shadowy foreign regime, the Church, and money. In this page-turner, plots are hatched, lives are lost, accusations are made, friends need and provide help, and relationships change. Money is used and pursued for both good and ill. Charity, envy and greed are on display. Throughout, action runs high. Find a unique character and story, and lose yourself in ROOT OF ALL EVIL? A PASTOR STEPHEN GRANT NOVEL. Keating said, “Since I wrote WARRIOR MONK, I’ve received surprising feedback from members of the clergy who once were in the intelligence community or know fellow pastors who did such work. It’s been fascinating. In ROOT OF ALL EVIL?, Pastor Grant, his family and friends, and some former co-workers have to deal with the consequences of how money, politics and religion mix, for better or for worse.” (Amazon)

Pastor Grant gets married early in this sequel. And he has to confront a former seminary classmate who has embraced prosperity theology. Meanwhile, Pastor Grant's new wife's adulterous ex-husband has been appointed to the U. S. Senate after the gruesome murder of his predecessor over his position on foreign aid money.

Both storylines converge in D.C. with Stephen Grant's CIA past. He is called back into service as an expert shot and has ample opportunity to provide pastoral care.

Back at home, a new Assistant Pastor at St. Mary's holds down the fort. The congregation has unique financial challenges of its own. Mrs. Grant comes to the rescue!


A timely topic in the USA is religious liberty. Don't be surprised to see Pastor Stephen Grant on the front lines.

Advent and Christmas approach. It’s supposed to be a special season for Christians. But it’s different this time in New York City. In AN ADVENT FOR RELIGIOUS LIBERTY: A PASTOR STEPHEN GRANT NOVEL, religious liberty is under assault. The Catholic Church has been called a “hate group.” And it’s the newly elected mayor of New York City who has set off this religious and political firestorm. Some people react with prayer – others with violence and murder. Stephen Grant, former CIA operative turned pastor, faces deadly challenges during what becomes known as “An Advent for Religious Liberty.” Grant works with the Cardinal who leads the Archdiocese of New York, the FBI, current friends, and former CIA colleagues to fight for religious liberty, and against dangers both spiritual and physical. AN ADVENT FOR RELIGIOUS LIBERTY: A PASTOR STEPHEN GRANT NOVEL is a thriller torn from today’s headlines. It’s a different, fast-paced, action-packed story of politics and violence trying to undermine faith during the Advent and Christmas season. Amazon.com readers have compared Ray Keating’s thrillers to the works of Clancy, Ludlum, Grisham, and Cussler. Keating’s previous books include WARRIOR MONK: A PASTOR STEPHEN GRANT NOVEL and ROOT OF ALL EVIL? A PASTOR STEPHEN GRANT NOVEL. (Amazon)

Ray Keating has a knack for writing on topics that could be pulled from tomorrow's headlines.

An atheist mayor-elect of NYC? I could envision that.

Pastor Grant taking out a terrorist? I could see that.

My favorite part was the NYPD reaction to Pastor Grant's expert use of his tactical knife (88).

I appreciated how the author also worked in a more appropriate ecumenism, Christian education, and one of my favorite devotionals, For All the Saints.

Should the Atlantic District and the Wyoming District ever have a joint Pastoral Conference, it would be a great joy to meet Pastor Grant and Pastor Corwin. Perhaps we could have some adventures together in Wyoming and/or New York.

In the meantime, enjoy both sets of novels, brother LCMS Pastors!

The Rev. Paul J Cain is Pastor of Immanuel Lutheran Church, Sheridan, Wyoming, Headmaster of Martin Luther Grammar School, Yellowstone Circuit Visitor (LCMS Wyoming District), a member of the Board of Directors of The Consortium for Classical and Lutheran Education, Wyoming District Worship Chairman, and Editor of QBR.