Quick Summaries are pithy paragraph-long reviews
of releases that cross our QBR desk.


These are reviews for when you don't have all day


to decide whether a resource is worth
your time, money, storage space, or trouble.


The following four Bibles and Bible references crossed our desk recently. Here's what we thought of them:

- What is this resource? Basically, it is a NIV 2011 pew Bible with notes by John J. Thompson including lyrics to the "top fifty worship songs."  The additional 250+ pages comprise "Thy Word," "Soon and Very Soon," "How Great Thou Art," and "In Christ Alone," just to name a few, with devotional notes and song guitar chord charts in the very back. I do not believe that the added content compared to a new NIV pew Bible is worth the additional $20 cost. I understand copyright use can be expensive. As a Lutheran, I very much prefer a more literal translation and my hymnal, Lutheran Service Book. Interesting, but will seem dated soon. Overpriced for what you get.

+ I have an appreciation for the approach of this Bible edition, not a full Study Bible, but not just an ESV text Bible: Christ in all of Scripture. Grace for all of Life. I very much like that Christ is in the forefront of understanding every verse from Genesis to Revelation. I am concerned about what I see as a Law approach: "Focusing on heart transformation rather than mere behavior modification, their points of application emphasize the Hows and Whys of practical application to daily living—in short, how the gospel transforms us from the inside out." Used by a Lutheran, I can see how one could "let the Gospel predominate." Calvinists, Arminians, and American Evangelicals may have more of a challenge based on their theological and practical biases to "see that the message of the Bible is a unified one—'to testify to the gospel of the grace of God.' " That is a different and better message than "the sovereignty of God," decision theology, and entertainment & experience, and much closer to the Lutheran approach, that the church stands or falls on justification. The Gospel Transformation Bible is Recommended. This is my favorite of the Crossway ESV editions with added notes published thus far. I have made use of the online edition already. / Nick Page's Simply the Bible arrived unsolicited. We were intrigued by the concise size and unique approach, especially in the art department. Each book of the Bible gets a two page spread with a picture and various summaries of each book. I found the introductions to be clear enough, but I disagree with the author's assessments about the creatures in Job (41), the author of Ecclesiastes (47), the choice of Godzilla art to accompany the book of Jeremiah (52), and his revolutionary, red flag, "workers" assessment of James (114). There is a fine line between humor and irreverence. It is a book I will use because I have it, but not one I could encourage my congregation members to take the trouble to go out and purchase. 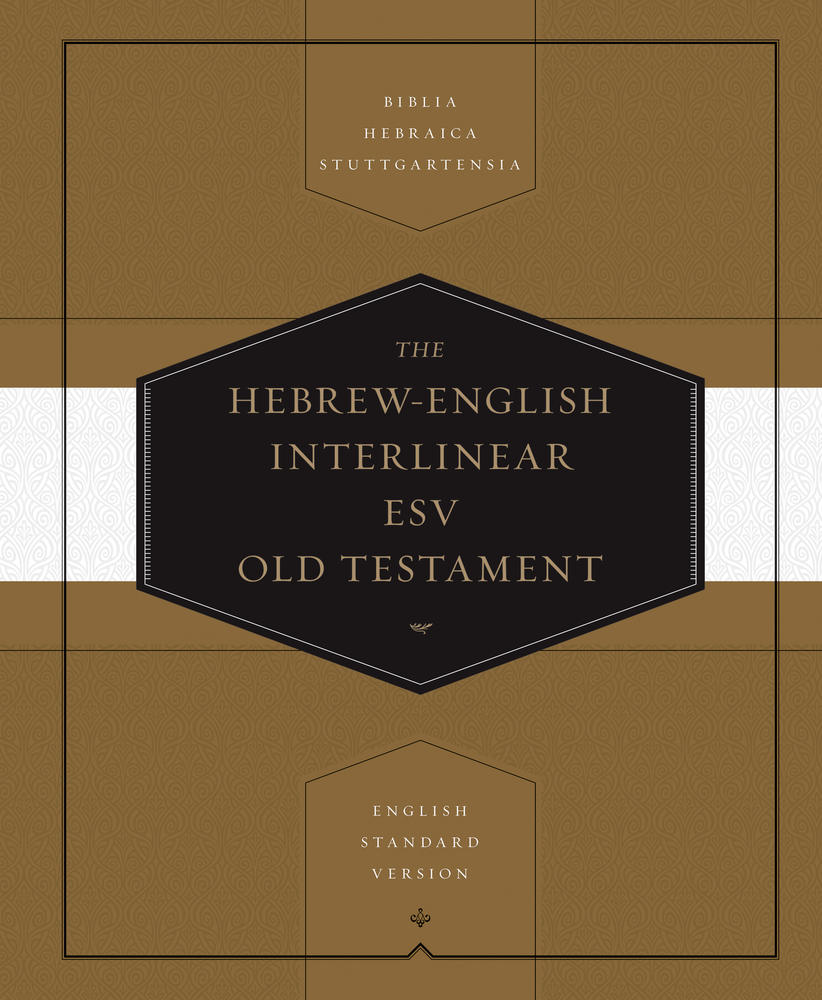 ++ Awesome. Simply Awesome. The Hebrew-English Interlinear ESV Old Testament pairs Crossways' essentially literal English Standard Version with the 5th edition of Biblica Hebraica Stuttgartensia in a traditional interlinear that is the newest addition to my essential Bible reference shelf at the desk in my pastoral study. Turn to page vii for the Introduction and to page ix for the basics on understanding this edition's code. The English text is broken up according to each Hebrew word. If you read it aloud, the translation sounds like the Yoda Standard Version. The full ESV is presented in the outside columns of each page. Yes, Aramaic is presented in this edition right where BHS has it (e.g., Daniel, 1869). Expect to find the basic meaning and morphology of each Hebrew word and the BHS critical apparatus. This book is worth the price tag. Highly Recommended!


Back in QBR Volume 1, Issue 3, (Apostles’ Tide, 2007) we reviewed Crossway's English-Greek Reverse Interlinear New Testament. We liked it then, while still desiring a traditional Greek-English traditional Interlinear. I have since grown to love it and we therefore reproduce that review below, including our (now fulfilled) request for an ESV Old Testament Interlinear.

“This state-of-the-art reverse interlinear New Testament, created in partnership with The German Bible Society and Logos Bible Software, breaks with the convention of traditional interlinear texts by keeping the English as the top-line entry and placing the Greek text underneath it. This approach allows you to see firsthand the accuracy with which the translators of the English Standard Version of the Bible (ESV) rendered the Greek text” (Crossway website).

The first line has the ESV English text, rather than the original Greek, making this a reverse interlinear.

The source Greek word is shown in the second line under the English translation. A Subscript number is provided at the lower right of each Greek word to show the original Greek word order. The arrow under “an” points to the source of an English word..

An English transliteration is provided on line three. This is a helpful aid to pronunciation, but could become a crutch

Parsing is provided on line four. Both “Paul” and “apostle” are: Noun, Nominative, Singular, Masculine. Abbreviation reminders are provided on the bottom of each pair of pages.

The fifth line provides a Strong’s Number to look up in a Strong’s Dictionary. Visit this book’s website for a free downloadable small Strong’s Dictionary: http://www.gnpcb.org/assets/pdfs/158134628X.dictionary.pdf. Perhaps this could be included as an appendix in the next print edition of this volume.

In addition to the numerical subscript giving word number order in the original, I would like to see the regular Greek text printed in the margin of a future edition, much like some regular interlinears give the full English in the outside margin.

The Preface addresses the “dabbling with Greek” objection. See page xvi, available for you to read at: http://www.gnpcb.org/assets/products/excerpts/158134628X.1.pdf .

As many in the Lutheran Church—Missouri Synod already know, due to the English Standard Version being the “primary” translation used in Lutheran Service Book and its companion resources, “The ESV is an “essentially literal” translation of the Bible, emphasizing word-for-word accuracy and precision along with literary beauty and readability. The publishers of the ESV have partnered with Logos Bible Software, the premier Bible research software developer, to publish this helpful resource. It will benefit anyone who desires to study the English text of the New Testament alongside the original” (Crossway website).

Other features include:
+       Transliterations of all Greek words for easy pronunciation
+       Strong’s numbers for effective cross-referencing to other study tools
+       Morphology of each word
+       Free electronic version of the ESV on CD-ROM, with additional study tools

This would be a valuable resource for a pastor or layman who has not learned Greek. It could also encourage an LCMS pastor who has not regularly used his Greek in some time, providing encouragement to get back into the language.

“John Schwandt is a Fellow of Classical Languages at New St. Andrews College, where he teaches Greek and has previously taught Latin and Hebrew. He earned an M.A. from Westminster Theological Seminary and has since developed and is currently Director of the National Biblical Greek Exam (NBGE), an online exam that seeks to promote the study of biblical Greek” (Crossway website).

While this is a unique and helpful resource, I would also like to see a traditional Greek-English ESV Interlinear from Crossway. In addition, we eagerly await The English-Hebrew Reverse Interlinear Old Testament: English Standard Version.
PJC

More information about each of these titles
may be found on each respective publisher's website.

The Rev. Paul J Cain is Pastor of Immanuel Lutheran Church, Sheridan, Wyoming, Headmaster of Martin Luther Grammar School, Yellowstone Circuit Visitor (LCMS Wyoming District), a permanent member of the Board of Directors of The Consortium for Classical and Lutheran Education, Wyoming District Worship Chairman, and Editor of QBR.

Popular posts from this blog

Creed, Confessor, Commentary, and Contending for the Faith