LHP Review: Music for Worship and the Christian Life 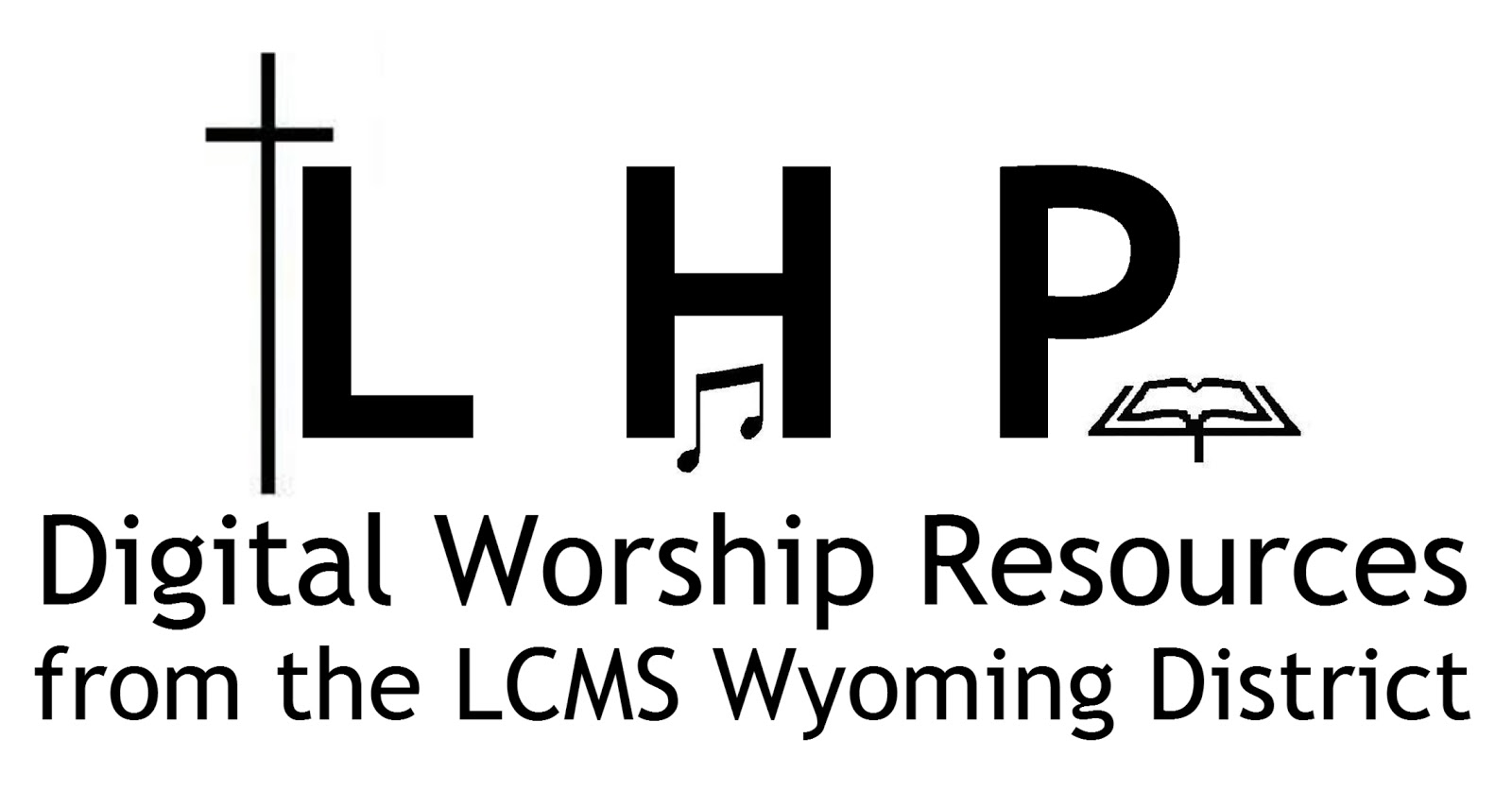 
Psalms, Hymns, Songs of the Spirit, and software are before us in this LHP Review.


I appreciated hearing more traditional choir voicings and tone paintings on this recording.

Choirs and congregations of the LCMS should be able to pick up these new Psalm texts paired with  well-known tunes upon a first singing.


We have featured reviews of The Book of Psalms for Worship and its various editions and recordings in previous reviews:

All are commended to you for your consideration.


More music awaits us in the latest release from Crossway's series, Reclaiming the Christian Intellectual Tradition.

We were surprised to see two large subject areas compressed together in such a thin volume. Do remember, these books are not complete courses, but the necessary supplemental worldview orientation each Christian needs in and after College.


Munson and Drake guide the reader to think critically about why something is objectively, rather than merely subjectively good. Sacred and secular examples will help the reader appreciate the treasures of Western Civilization while learning to be more critical about pop culture and every fad and "wind of doctrine" in modern music and visual art.

God made us to enjoy beauty wherever we find it, whether it’s music or the visual arts. But sin finds ways to obscure what is right in front of our eyes and ears.
Drawing on years of teaching experience, two professors offer tips for understanding, evaluating, and appreciating art in all its forms while highlighting the important ways in which art and music reflect the glory of God. This book will help you better understand and appreciate humanity’s pursuit and imitation of beauty through artistic expression—a vital means by which we bear witness to the beauty of our Creator.


We turn our attention to three titles by Lutheran University Press and Concordia University Chicago.

An essential biography and history of what are for all practical purposes "lost years" for many American Lutherans, Dr. John D. Vieker writes of August Crull and the Story of the Evangelical Lutheran Hymn-Book.


August Crull (1845–1923) edited and compiled the first edition of the Evangelical Lutheran Hymn-Book (1889), thus playing a critical role in shaping the hymnic tradition of the Missouri Synod as it transitioned from German to English. This study tells the story of Crull’s pioneering labor in the formation of this seminal hymnal and documents the twenty-year journey to its final edition in 1912, which became the first, official English-language hymnal of the Missouri Synod.

JON D. VIEKER served for twelve years as assistant director for the Commission on Worship and since 2010 has served as senior assistant to the president of The Lutheran Church–Missouri Synod. This is the second of a series of monographs published by the Center for Church Music, Concordia University Chicago, River Forest, Illinois—Shaping American Lutheran Church Music—highlighting persons, movements, and events which have helped shape the course of church music among Lutherans in North America.

Imagine a hymnal without music. The Lutheran Hymnal would not have been what it was to the LCMS and the Synodical Conference without the 1892 Evangelical Lutheran Hymn-Book the desire to have a tune book for it. That led to ELHB 1912.

Vieker highlights the faithful worship history of the LCMS (and some of the typos and editorial disagreements along the way) in this wonderful volume.

Robert Hawkins writes a biography of Harriet Reynolds Krauth Spaeth in the form of a literary Prelude and Fugue. She "was music editor of the Church Book with Music (1872), [and] she was the only woman ever to serve in that capacity.

Worship wars are nothing new. Spaeth helped pave the way for the Common Service of 1888 (16), but her work and that of confessional Lutheranism faced and still faces criticism and praise, whether from Reed or Grindal (28).


The author served for twenty-six years as professor of worship and music, and dean of Christ Chapel at the Lutheran Theological Southern Seminary in Columbia, South Carolina.

This is the first of a series of monographs to be published by the Center for Church Music, Concordia University Chicago, River Forest, Illinois—Shaping American Lutheran Church Music—highlighting persons, movements, and events which have helped shape the course of church music among American Lutherans in North America.

Part biography, history, a "behind the scenes look at LW, and hymnody collection, The Precious Gift by Scott Hyslop gives us The Hymns, Carols, and Translations of Henry L. Letterman.

Henry L. Lettermann (1932-96) served as professor of English at Concordia Teachers College, River Forest, Illinois, from 1959 to 1988 where his talent for poetry became readily apparent. From 1979 to 1987 he served as a member and secretary of the Hymn Text and Music Committee which produced Lutheran Worship in 1982. His original texts, translations, and observations about the process of preparing this new hymnal provide fascinating insights.

Scott M. Hyslop received a DMA in organ/church music from the University of Michigan. In addition to numerous compositions for the church, he has also published a biography of Paul Manz (Morning Star, 2007). He presently serves as director of parish music at St. Lorenz Lutheran Church in Frankenmuth, Michigan.


All three booklets are recommended. We pray for more additions to this series.

We've reviewed previous versions of Finale composing software in the past. This time, we REALLY tested it out. Getting Started
Getting started is easy. Whether you’re setting up your score, picking a music font, or watching a QuickStart Video, Finale guides you to perfection.
Entering Notes
Enter notes your way – from MIDI to your mouse, from scanning to Finale’s exclusive MicNotator®, no other software offers you more note entry options.
Adding Markings, Lyrics, and More New in 2014 – Expanded Percussion Playback
Finale automates and streamlines the process of entering lyrics, guitar tab, chords, and more.
Editing Tools
Finale makes it easy to perfect your score with handy editing tools like the Selection tool, Multiple page editing, ScoreManager®, and intuitive cut/copy/paste options.
Hearing Your Music New in 2014 - More Garritan Sounds
Finale includes world-class instrument libraries, support for external sound libraries, and several innovative tools to make sure your music sounds as good as it looks.
Sharing Your Music New in 2014 - Backward and Forward Compatibility
In addition to printed pages and audio files, Finale helps you create electronic documents that anyone can edit, print, and save. No one offers more ways to collaborate and share your music.
Educator Tools New in 2014 - More Resources
With exclusive features like SmartMusic® support, customizable music education worksheets, and the Exercise Wizard, Finale offers music educators more ways to save time.
Composing and Arranging Timesavers New in 2014 - Expanded Linked Parts
Exclusive idea-generating features, essential tools like transposition and range checking, and timesavers like Linked Parts are all included.
Production and Sequencing Tools
Finale is able to open or save as a standard MIDI file to work in conjunction with the industry’s most in-demand production and sequencing programs. Video support and Finale’s built in mixer are just two of many tools inside of Finale that help you prepare your score for final production.
Finishing Touches New in 2014 - Improvements to Rests, Accidentals, SmartShapes and more.
Finale is the industry standard because it offers ultimate control of the printed page.
Using an older version of Finale?
Finale is constantly being improved and new features are added each year. In the past few years these include: Linked Parts, easier chord entry, improved staff layout, percussion notation enhancements, improved lyrics, automatic rehearsal marks, and more.
See what you’ve been missing.

To put Finale 2014 through its paces, we had had ambitious plans. They all fell apart when my laptop seized up and died just before Thanksgiving. I was essentially without a personal computer (though I still had computer access) for nearly a month. And to be clear, NO, the Finale software was NOT to blame. We were able to rescue the data from my machine and successfully restore my data and Windows 8.1 to the very machine I'm writing on.

Vacation time for my niece's Confirmation on Palm Sunday gave me time to pause and reflect and compose. It wasn't planned. I heard a "wouldn't it be nice to have..." from friend and in a quiet moment I heard a new original melody to an historic hymn text playing in my head. It found its way onto a notepad in my own secret code for when I don't have staff paper at hand. I finished the set of compositions the same way over the next few days at home. And a new Mass setting for Lutherans was born.

Entry of the melody into the Finale 2014 software was easier than I had remembered. I still had minor challenges to overcome when correcting typos in a potential arranger's name I inputted through the Wizard. I still dread the laborious process of inserting lyrics or hymn texts, thought I have appreciated the semi-automations of Finale versions before this F2014.

What do I love? A LOT. I sent of my compositions to a friend with an older version of Finale for arrangement. Boy, do I owe him! They arrived today to my great joy, and were recognized as Finale Legacy Notation Files by Finale 2014. I saved them in the new format, printed everything, and exported the files as .wav audio. Everything worked without a hitch.

I can also print them in "hymnal" format bulletin inserts, just like I always dreamed of.


I wholeheartedly recommend Finale 2014. They have listened and responded to some of this reviewer's previous critiques and requests. I'm happy with the software. And I'm sure it will be even better in the next upgrade.


Sing a New Song Unto the Lord! SDG

The Rev. Paul J Cain is Pastor of Immanuel Lutheran Church, Sheridan, Wyoming, Headmaster of Martin Luther Grammar School, Yellowstone Circuit Visitor (LCMS Wyoming District), a permanent member of the Board of Directors of The Consortium for Classical and Lutheran Education, Wyoming District Worship Chairman, and Editor of QBR.